sun, wind, and a bit of rain… enjoying my favo

covid-recovery takes a bit longer than I hoped, bu

came out to the @brutaleventsuk triathlon as a sur

10km BigBrutalSwim done… been crewing at the @b

I just couldn’t stay away… early start at tod

7AM start to beat the heat… #happysunday #sund

playing outdoors without a training-schedule or bi

throwback to three years ago today… it took me

worked hard for it, so might as well wear the t-sh

still trying to wrap my head around what happened

what an amazing group of people… 😍 I don’t

We, #ultrateamNL, had a lot of fun and are very pr

Yessss-Koen nailed it!! 30hrs, 44min and some seco

Running-walking-powerwalking - Koen is getting clo

just a really short update, since I just reached a little milestone in my running ‘career’… “A few years ago” I went completely out of my comfort zone and entered the local Runnersworld running store… Bought my first pair of shoes (a pair of Brooks, can’t remember the model…), and started running… (Thanks @gertjan for fitting me with those shoes, and many shoes after that!)

And today, after my interval run in the rain, my training-log shows that I’ve ran just over 20.000km… Basically I (virtually) ran from the north to the south pole… That is a lot of running…

But no big story here today: I’m not going to do a full ‘looking back at some of the highlights post’ (since I’ve done that when I reached a thousand runs, and more recently at 50.000km of cycling as well), but just a few numbers to mark the occasion…

total running kilometers:
20.004,95
(according to wikipedia this equals a trip from the north to the south pole)

number of runs:
1227*
(*disclaimer: multiple runs per day show up in my excel sheet as one run, so the actual number should be slightly higher…)

ultra-runs (both races and long training-runs):
41
(3 of those as part of an ultra-triathlon)

coutries ran in:
11
(raced in 8 of those countries)

pairs of shoes used:
unfortunately there’s no data on this… But from memory and some browsing through photos it’s at least 21 pair of shoes… Probably a bit more though… 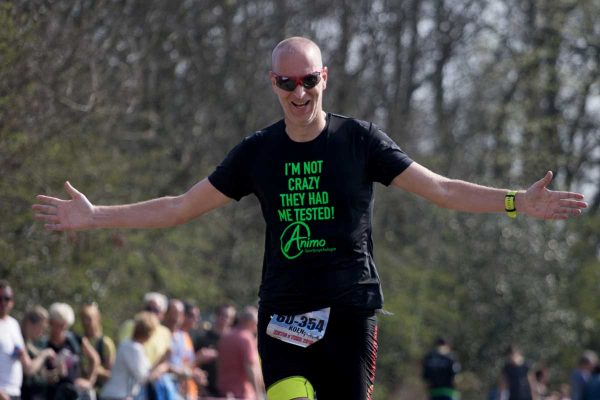 thanks animosportpsychologie for supporting the crazy adventures! (photo: finish at the ’60 van Texel’ 60km run in 2019)

…And now ready for the next 20.000km of adventures! Thanks to all who’ve been part of the journey; both those running with me and those providing any other form of support… The running is just part of the fun, the social aspect of it is a much bigger part!